Signaling cascades and the epigenetic mechanisms involved in ocular development, degeneration, and regeneration.

Significant progress has been made in regenerative ophthalmology, thanks to an understanding of the molecular mechanisms regulating ocular development. However, much remains to be discovered to improve regeneration of damaged or lost ocular tissues in order to restore vision in people who have lost their sight. The ongoing studies in Dr. Ivanov’s laboratory are aimed at exploring the signaling cascades and the epigenetic mechanisms involved in ocular development and regeneration, with a specific focus on neurogenesis in the developing retina and on strategies geared towards stimulating neuronal regeneration in the adult retina. The second important direction of Dr. Ivanov’s laboratory research has been to understand the role and mechanism of sterile inflammation, or innate immune response in the absence of live pathogens, in the pathophysiology of retinal disorders, with a specific interest in the contribution of a signal for “danger” (the so called damage-associated molecular patterns or DAMPs) and pattern recognition receptors. 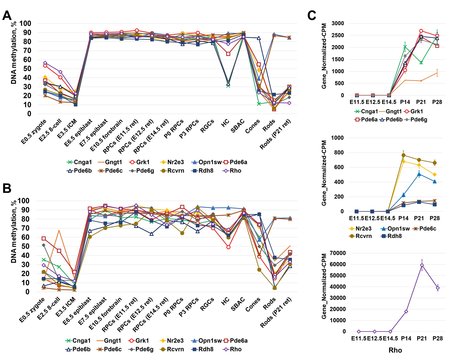 Figure 1. The analysis of DNA methylation in promoters of a subpopulation of photoreceptor and phototransduction genes revealed different dynamics of cytosine methylation in different cell types at different stages of embryogenesis. A) Mean methylation levels were calculated using the “methylKit” and “MethylSeekR” software packages (RPCs- retinal progenitor cells; RGCs-retinal ganglion cells; HC-horizontal cells; SBAC- starburst amacrine cells). B) Mean DNA methylation levels based on the methylation of individual CpGs in the promoter and first exon regions of photoreceptor and phototransduction genes were reduced in mature photoreceptors during retinal development. C) Reduced methylation of cytosines in close proximity to a transcription start site (TSS) in photoreceptor genes was accompanied by increased expression of these genes. (Gene_Normalized-CPM is the normalized gene level at counts-per-million)

Figure 2. Notch-Delta-Jagged signaling: A) The Notch pathway is activated when the Notch receptor of one cell interacts with the ligand of a neighboring cell leading to cleavage of the Notch intracellular domain (NICD) and its release into the cytoplasm. NICD acts as a transcription factor and controls the expression of many genes, including Notch receptors and ligands. However, while it directly activates the expression of Notch receptors, the Jag1 ligand, and transcription factor Hes1 (which acts as an inhibitor of any gene expression), it indirectly inhibits Dll1 expression through Hes1. The special family of fringe proteins (Lfng and Mfng) increases the Notch receptor’s affinity to bind to Dll1 and decreases it for Jag1, thus promoting lateral inhibition over lateral induction. B) Jag1/Notch signaling forms a double positive feedback loop between the two neighboring cells and forces them to adopt the same fate/phenotype: high expressions of the Notch receptor, Jag1, Hes1, and low Dll1 expression. The Jag1/Notch cells both send (due to Jag1 ligands) and receive (due to Notch receptors) signals (a so-called hybrid Sender/Receiver (S/R) phenotype). The mechanism that promotes this phenotype is known as lateral induction. C) Dll1/Notch signaling causes a double negative feedback loop between the two neighboring cells promoting them to acquire two opposite fates/phenotypes (a “salt-and pepper” pattern): Sender (S) (high Dll1; low Notch, Hes1, and Jag1) and Receiver (R) (high Notch and Hes1; low Dll1 and Jag1). The mechanism that promotes the two opposite fates/phenotypes is known as lateral inhibition.

3. Cell death and inflammation: Common forms of vision loss occur when retinal ganglion cells (RGCs) undergo apoptosis and/or necrosis in the retina. Apoptosis, however, is not as dangerous to the surrounding tissue as necrosis. Apoptotic cell death stimulates the production of anti-inflammatory and neuroprotective factors from immune cells that have internalized the apoptotic cells. Our studies indicate that therapeutic strategies based on mimicking a systemic increase in levels of apoptotic signals can significantly reduce retinal injury. In contrast, endogenous factors called damage-associated molecular patterns (DAMPs) liberated from necrotic cells mediate cytotoxic, pro-inflammatory responses in retinal tissue. We demonstrated that these DAMPs, released from lysed necrotic cells, lead to inflammation and retinal damage. We also found that suppressing neuronal necrosis in the retina promotes a neuroprotective environment and reduces tissue damage. Thus, in contrast to apoptosis, necrosis can trigger further RGC death and retinal damage. Historically viewed as an entirely accidental and unregulated cellular event, we now know that that necrosis, like apoptosis, can be regulated and executed by programmed mechanisms (“necroptosis”). We demonstrated that necroptosis contributes to retinal injury through direct loss of RGCs and induction of associated inflammatory responses. Since necroptosis can be regulated, research into its exact mechanisms harbors colossal translational value that could lead to novel therapies. The effectiveness of some of these therapies has already been demonstrated in our published studies.

4. Molecular mechanisms of sterile inflammation in the retina: It is known that sterile inflammation, or the innate immune response in the absence of live pathogens, is a key player in the pathogenesis of many ocular diseases. But what are the sources of sterile inflammation? Identifying and eliminating such sources/triggers could ease degenerative conditions by addressing their root causes—rather than simply covering up symptoms. My lab’s research brings us closer to providing an answer to this and related questions. We demonstrated that after engaging DAMPs (Hsp70, Hmgb1, etc.), pattern recognition receptors (PRRs), such as Tlr4 and Rage, activate signaling cascades that trigger inflammation and retinal damage. We also identified new PRR-dependent signaling cascades that mediate retinal damage. We found that the Tlr4/Trif-dependent signaling cascade contributes to retinal damage both directly (through loss of RGCs) and indirectly (through induction of neurotoxic pro-inflammatory responses). The results of our work provide an intellectual foundation for the development of new therapeutic strategies that could reduce neurotoxic, pro-inflammatory responses specifically in the retina without globally suppressing the immune system (Figure 3). 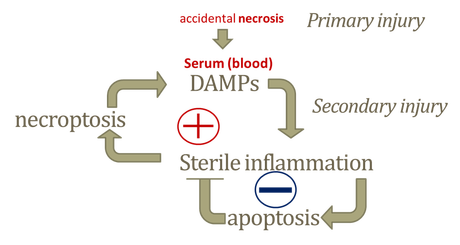