When a man has previously had a vasectomy, but now wishes to father children, advanced methods may be able to reverse the vasectomy and restore the ability to have kids.

During a vasectomy reversal, your urologist can reconnect the ends of your vas deferens (the tube that carries sperm from the testicles to the penis). Once this tube is reconnected, sperm can enter the penis and be a part of your ejaculation.

Who is a Candidate?

Any man who has previously had a vasectomy may be a candidate for vasectomy reversal.

Your urologist will perform your vasectomy reversal on an outpatient basis, meaning you’ll be able to go home the same day after the procedure. You will be under anesthesia (asleep) during the surgery. 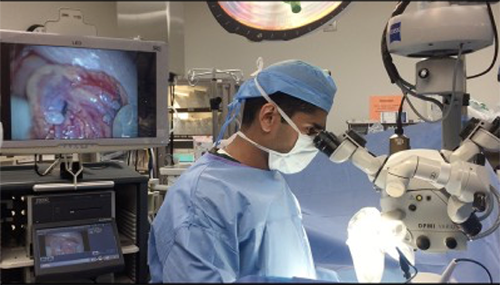 After making two small incisions, your urologist will remove the damaged ends of your vas deferens. They’ll take a fluid sample to check for sperm and be sure your vas deferens is not blocked.

Using a microsurgical approach and a high-powered microscope, your urologist will carefully reconnect your vas deferens. After it is reconnected, they will close the small incisions, and your surgery will be complete.

If there is no sperm in the fluid, your urologist will have to perform a more complicated procedure to reconnect your vas deferens. Thanks to advances in surgery, this longer, more complex procedure has the same success rate as simple vasectomy reversals.

Recovery from a vasectomy reversal should be relatively swift and fairly comfortable. Any pain that might be experienced after surgery can be controlled with oral medications. About 50% of men experience discomfort that is similar to the level they had after the original vasectomy. Another quarter report less pain than accompanied the vasectomy. The final 25% say the pain is somewhat greater than after the vasectomy. The reassuring news is that any pain severe enough to require medication rarely lasts longer than a few days to a week.

Most patients are back to normal routine and light work within a week. Urologists usually want their patients to refrain from heavy physical activity for two to three weeks. If your job requires strenuous work, you should discuss with your surgeon the earliest time you can return to work. You will be advised to wear a jockstrap for support for several weeks. You will likely be restricted from having sex for approximately two to three weeks.

It takes on average one year to achieve a pregnancy after a vasectomy reversal. Some pregnancies occur in the first few months after the reversal procedure, while others do not occur until several years later. The urologist will request a semen analysis every two to three months after surgery until your sperm count either stabilizes or pregnancy occurs. Unless a pregnancy occurs, a sperm count is the only way to determine surgical success. While sperm generally appear in the semen within a few months after a vasovasostomy, it may take from three to 15 months to appear after a vasoepididymostomy.

In either case, if the reversal works, the you should remain fertile for many years. The possibility of subsequent pregnancies is an important advantage of this procedure over sperm retrieval techniques for in vitro fertilization. Only approximately 5% of patients who have sperm appear in the semen after a vasectomy reversal later develop scarring in the reconnected area, which could block the passage of sperm again.

Advanced research in men’s health. Our urologists are dedicated to men’s health and conduct innovative research into many conditions. Our expert team has helped develop new minimally invasive and robotic surgical procedures to treat cancers, incontinence, and more. We give you access to leading-edge treatments and clinical trials that aren’t widely available. In addition, we have established the eighth fellowship program in the nation dedicated solely to teaching physicians how to care for men’s health.

Innovative, expert urology care at the Desai Sethi Urology Institute. Our team of urology experts delivers advanced care for all urologic conditions. We use the latest research and the least invasive procedures to help you feel better and recover more quickly. Our experienced urologists design a personalized treatment plan to give you the best possible results.