Uterine fibroids are common non-cancerous (benign) growths of the uterus. They are also referred to as fibroids, leiomyoma, leiomyomata, myoma and fibromyoma. They can range in size from a grape to watermelon, and can mimic pregnant uterus.

Although fibroids are very common, for most women, they do not cause symptoms or cause only minor symptoms. It is common for a woman to have multiple fibroids and it may be difficult to understand which fibroid is causing your symptoms.

Bulky symptoms are due to large size of the fibroid and include abnormally enlarged abdomen, pelvic pain/pressure, back pain, leg pain, pain during sexual intercourse. Pressure on urinary bladder may cause frequent urge to urinate or urinary incontinence. Pressure on the bowel may cause constipation and bloating.

Fibroids are hormonally sensitive so symptoms are likely to be cyclical, like menstruation. As estrogen levels tend to increase prior to the onset of menopause, this may cause the size of many uterine fibroids to increase along with the symptoms. During menopause, the levels of estrogen decrease dramatically, causing fibroids to shrink. However, women taking hormone replacement therapy (HRT) during menopause may not experience any symptom relief because the estrogen contained in this regime may cause fibroid tumors to enlarge and symptoms to return.

Approximately 20-40 percent of women 35 years and older have fibroid tumors. Fibroids are more common among women of African-American descent. Some statistics indicate that up to 80 percent of African-American women will develop uterine fibroids. The majority of uterine fibroids are diagnosed and treated in women between the ages of 35 and 54. However, fibroids can and do occur in women under the age of 35, even as young as the early 20s.

Uterine fibroids are the most frequent reason why premenopausal women get hysterectomies and, therefore, are a major public health issue. Of the 600,000 hysterectomies performed annually in the United States, one-third is due to fibroids.

The wall of the uterus is made of three layers. Fibroids can be categorized according to their location within uterine wall.

Pelvic Exam
Your gynecologist might feel that your uterus is misshapen during your routine pelvic exam, which is a sign of uterine fibroids.

Pelvic Ultrasound
Your gynecologist can use pelvic ultrasound to check for fibroids inside your uterus. This noninvasive test uses radio waves to create a picture of your uterus.

Blood Tests
Your doctor may use blood tests to check for causes of abnormal bleeding.

Magnetic Resonance Imaging (MRI)
MRIs are radiation-free tests that can show your physician where your fibroids are located and how large they are.

Hysterosonography
During a hysterosonography, your gynecologist inserts a saline solution into your uterus, which makes it easier to see fibroids with an ultrasound.

Hysteroscopy
During this test, your doctor inserts a specialized, lighted camera into your uterus to look for fibroids or other abnormalities.

Only 10 to 20 percent of women who have fibroids require treatment. Because fibroid tumors can be multiple and can be spread out in the uterus, there are usually more fibroids present than can be detected because of their small size. Even a woman who has only one visible fibroid needs to consider that there may be multiple uterine fibroids present when discussing therapy.

Medical Monitoring
If your uterine fibroid doesn’t cause any symptoms, monitoring the fibroid for growth or changes may be the only necessary treatment.

Hormonal Treatment
Medications for uterine fibroids target hormones that regulate your menstrual cycle, treating symptoms such as heavy menstrual bleeding and pelvic pressure. They don’t eliminate fibroids, but may shrink them. The side effects of using these medications are similar to the symptoms experienced as a result of hormonal changes during and after menopause. These include weight gain, hot flashes, vaginal dryness, mood swings, changes in metabolism and infertility. In almost all cases, once hormone therapy has been stopped, fibroids tend to grow back, possibly reaching their original size again. This often occurs if the use of hormone therapy is not accompanied by another treatment.

Intrauterine Device (IUDs)
IUDs can help stop the symptoms of uterine fibroids, though they do not shrink the fibroids. IUDs also prevent pregnancy.

Endometrial Ablation
A procedure that destroys the endometrium – the lining of your uterus – with the goal of reducing your menstrual flow. In some women, menstrual flow may stop completely. No incisions are needed for endometrial ablation. Your doctor inserts slender tools through your cervix — the passageway between your vagina and your uterus. The tools vary, depending on the method used to destroy the endometrium. Some types of endometrial ablation use extreme cold, while other methods depend on heated fluids, microwave energy or high-energy radio frequencies. Endometrial ablation can only be used to treat submucosal fibroids that are less than one inch in diameter.

Hysterectomy
Hysterectomy is the removal of the uterus and is considered major abdominal surgery. It requires three to four days of hospitalization and the average recovery period is six weeks.

Hysteroscopic Myomectomy
During this in-office procedure, your gynecologist can remove your fibroids through your cervix and vagina. Not all types of fibroids can be removed this way.

Laparoscopic or Robotic Myomectomy
During this procedure, the gynecologist removes the fibroids through a few small incisions in your abdomen. Laparoscopic or robotic myomectomy puts you at less risk for pain, scarring, and infection after surgery. Myomectomy, like UFE, leaves the uterus in place and may, therefore, preserve the woman’s ability to have children.

Myolysis
Myolysis is a minimally invasive procedure that uses radio wave energy, electricity, or cold to destroy fibroids and the blood vessels that feed them. This causes the fibroids to shrink and die.

Uterine Fibroid Embolization or Uterine Artery Embolization
Uterine fibroid embolization is performed by a physician called an Interventional Radiologist (IR). For this minimally invasive procedure, your IR physician inserts special particles into the blood vessels around your fibroids. 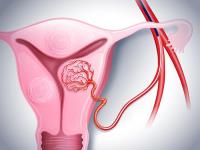 These particles block blood flow to the fibroids so they shrink and die. The procedure has been shown to be equally effective as hysterectomy (surgical removal of uterus) for symptom relief by multiple studies. Learn more about UFE.

Care designed with women in mind. Our experts provide research-backed care that is tailored specifically for each woman. We help make care more convenient — offering advanced in-office procedures, the latest diagnostic tests for fast results, and access to comprehensive women’s health services for women of all ages — all in one location. Our highly-trained physicians and staff are sensitive to the needs of every woman, so you can feel comfortable and confident in your care and treatment.

Leaders in advanced robotic surgery. We have some of the world’s most experienced robotic surgeons for gynecologic laparoscopy and robotic-assisted surgery. In fact, doctors come from all over the world to learn from our expertise. The University of Miami Health System was the first academic medical center to get the da Vinci Xi robotic surgery system and complete more than 5,000 robotic surgeries — procedures that offer less pain, lower risks of infection, and a quicker recovery.